First up, I finished drafting another book this week. It’s called CREATUREFALL and it’s kind of like Pokémon except the Pokémon eat people. I sent it off to my agent just yesterday. I updated the header for the time being with the cool artwork my friend Stephane Imbert drew.

I talked about it briefly in my last post about diverse books. The main character’s a thirteen-year-old dwarf trying to live up to the legacy of his mother who was a famous warrior in the last creaturefall. Talk about your 30,000 foot summaries…

But this post is not about that book. I’ll post about CREATUREFALL another time. This post is about creatures, though, so it’s at least tangentially related.

In Alabama, we had centipedes. They looked kind of like this: 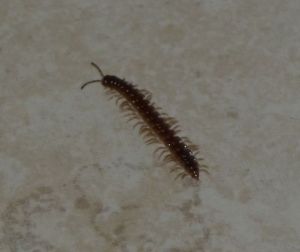 A couple of inches long, at best. They roamed around the gardens eating all sorts of pests, and occasionally came into your house and you squashed them or sprayed them and tossed the remains down the toilet. Creepy, in some ways, but mostly harmless.

I heard before we came to Japan this time that my father-in-law had some centipedes in his house. The thought of this did not bother me in the least. Centipedes are not spiders, after all. They’re just weird little crunchy worms.

Or so I thought.

See, when the Japanese say “centipede”, what they mean to say is “hundred-legged merchant of death”. The Japanese word for centipede is mukade and that is all I’m calling them from now on because these are not centipedes. Calling these things centipedes is like calling a sabertooth tiger a calico.

Here, allow me to illustrate: 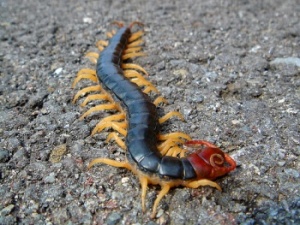 “Oh,” you’re thinking. “I guess it does look a bit creepy, but it’s still just a centipede.”

No. No, it isn’t. See, this thing isn’t content to only be an inch or three long. Oh no. 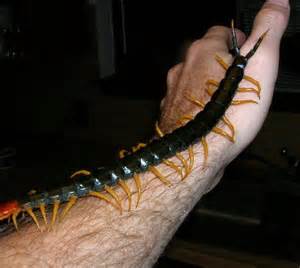 You can see we’re well beyond “step on it” or “drown it in bug spray” territory here. I don’t even know what you do with one of these things. How do you attack it? Since firearms aren’t legal in Japan I can’t very well bring my hunting shotgun, though that’s probably the best bet. I suppose you could still use bug spray but use it with a match to create a kind of anti-mukade napalm spray. I don’t know. I just. don’t. know.

For the record, that’s not my hand. I have no idea whose hand that is, or why they thought this was a good idea.

Mukade can grow up to 20cm long (that’s just shy of 8 inches). Their bites are insanely painful, and have been known to cause deaths in people who are allergic to them. Also, they hunt. In pairs. Just… no. No no no no no.

I haven’t seen any in the house yet, but I’m starting to question the wisdom of the Japanese custom of sleeping on the floor. At least during mukade season. The neighbor (my father-in-law lives in a condo) also had a mukade problem. She showed me her bites. Five in a row. Left scars. I did see a dead one outside on the street. It was about 5 inches long. A car ran over it. I can only imagine the damage the car suffered as a result. Seeing its flat body did fill me with a kind of glee, though, because nope. Nope to that thing.

So when my father-in-law says he’s got centipedes in his house, what he means is, it’s time to move. To Mars. And obliterate the Earth with an orbital ion cannon on the way out.

6 thoughts on “They grow em’ bigger over here.”