I wasn’t going to get into this. There are any number of reasons. I’m no fan of jumping on internet bandwagons. Especially because they quite often turn into internet hate trains, and that’s just not my thing. But I enjoyed sitting back and watching this hashtag on Twitter over the last couple of days.

Then, today, I got a mentioned in a Tweet by a good friend and I started feeling guilty:

@BenLJBrooks Should be in this discussion, especially with his agent trying to sell fantasy with Japanese characters. #WeNeedDiverseBooks

He’s right. I should be in this discussion. But not because of RYOJI AND THE RIDDLE MASTERS. I’ll tell that book’s submission story someday–hopefully when it’s en route to a bookstore near you.

No, see, the reason I should be in this discussion is right here: 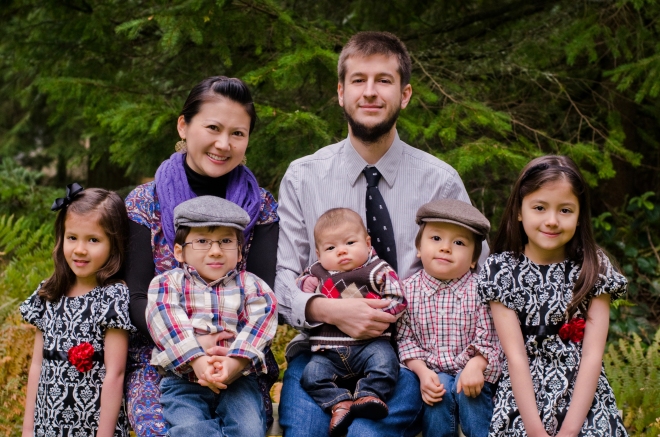 Yes, that’s quite the assortment of children. Five half-Japanese kids, ranging in age from 9 years old down to 8 months old. The oldest two are voracious readers of all genres. The dude in glasses is starting to get his reading on. The other two love to listen to one of their siblings or parents read to them. Who’d believe a writer would spawn five children that all loved books and storytelling? All right, so now it’s question time. Surprise, there’s a test with this blog post. Two questions.

Name a half-Asian hero in popular American literature. Go ahead, you’ve got time. I’m not looking at my watch. You can spend all night on Google if you want. Heck, for that matter, name a full Asian hero. There aren’t that many out there, especially not in children’s literature. While my kids are too young to form a truly complex opinion about the matter, they are definitely starting to notice that the kids in the books they read are usually white.

My kids would love some half-Japanese role models in the fiction they read. It’s more than just changing a character’s physical description in a tale–though that’s always a good start. There are experiences tied up in that racial identity as well that people who are part of the ‘norm’ will never understand. It’s often a very lonely feeling. I lived in Japan for a couple of years, and outside of the one French Canadian programmer I worked with, all my interactions were with Japanese people. Aside from one incident with my boss at the time, there was never any overt racism directed at me, but that wasn’t the problem–the problem was the loneliness. When you go for years not seeing anyone like yourself represented in the media around you, it creates a kind of emptiness inside that’s impossible for me to describe. I’ve heard other people in America who never see themselves speak of a similar loneliness.

Name a dwarf hero in popular American literature. I can think of exactly one: Tyrion Lannister. There’s also a YA novel starring a character with dwarfism: JEPP, WHO DEFIED THE STARS. In movies we’ve got WILLOW. And… not much else.

“I’m all for diversity, but why in the world are you bringing up dwarfism? Isn’t diversity all about race and gender identity and stuff?”

Go back up there to that picture of the eighty-seven children. See the one sitting on my wife’s lap with the glasses and the rather dapper cap? He’s Noah, and he’s a dwarf. I suppose I could start reading A Song of Ice and Fire to him but at 5 he’s probably a BIT too young to hear of Tyrion Lannister’s exploits. So what are my options?

For a long time I’ve wanted to write a story with a dwarf in it with a prominent role. It’s been hard finding the right one. Dwarfism is tricky because it affects an action-heavy story in ways substantially different (not greater, mind you, just different) than something like skin color or gender. There are specific physical limitations to consider, and I tend to write very actiony things. I couldn’t quite find the right place in RYOJI, though most of that had been written in some state or other in my head since 2006/7.

I’ve recently been working on a new project codenamed CREATUREFALL. Middle grade fantasy set in a world where every seventy years an assortment of crazy creatures straight out of an old 80s RPG rain down from the heavens and cause general havoc. I’ve felt like something’s been missing from my MC in that story. He’s got the typical “kid who always dreamed big goes on to prove to the world he can live up to it” thing going on, but so what? That happens in so many stories.

Then today, while chatting with a friend, it hit me. A way to weave dwarfism naturally into the story, along with all its limitations, with all the emotional struggles, and without it feeling like I’m just checking a diversity box or dwarfsploiting (is that even a word?!).

My main character, a thirteen year old boy named Mako, is going to be a dwarf.

I’ve had several heart-wrenching conversations with my son about things he quite literally will never be able to do, about the difficulties he faces doing everyday tasks that you and I take for granted. I’ve had conversations with teachers and students about how to treat him because the default reaction is “oh he’s so cute! look at the little child!” It’s something I’ve experienced as close to first-hand as one can without being a dwarf. And yet when I see that gleam of distant dreams in his eyes, when I see his wild and hilariously witty personality, I get to thinking that maybe I’m wrong, that maybe even those things that seem flat out impossible he just might find a way to do them.

The answer is not forcing stories to conform to a sort of census-like demographic checklist. Constraining art in such a legalistic way isn’t good for anybody. The answer is not to take iconic heroes and make them gay/biracial/handicapped. That generally just makes everyone who loves those heroes as they are uncomfortable–and there’s nothing wrong with loving our old heroes.

What we need are new heroes. New stories. Authentic stories, told by people who come from places and cultures and identities that are outside the realm of what we’ve got so much of already. Sesame Street did a better job forty years ago of representing American diversity than the entire spectrum of our popular literature does today.

The answer is to be the change we want to see.