This many. For historical fiction, at least. 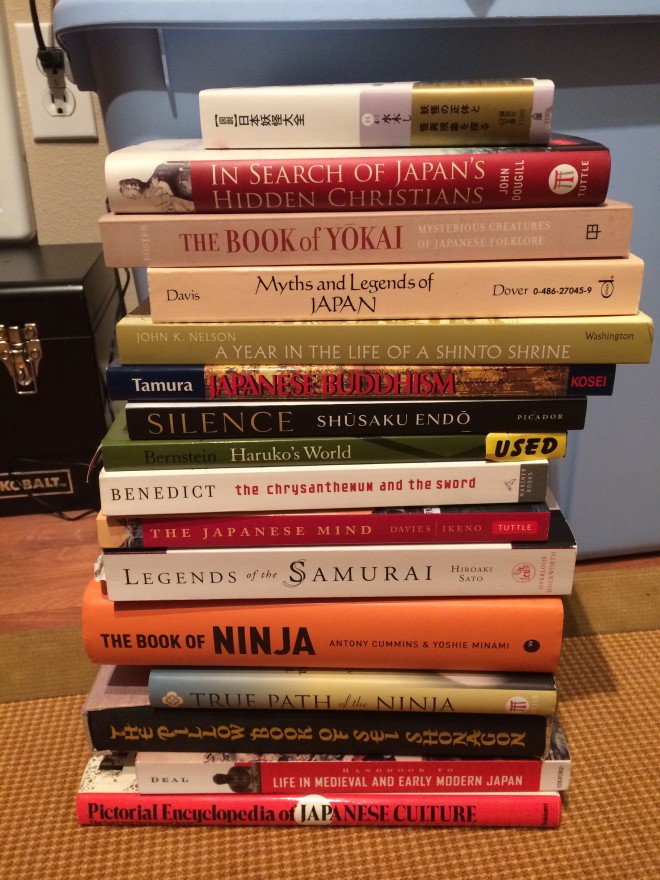 And that’s not counting the vast array of internet resources I had at my disposal or the copious amount of time I lived in, worked in, and traveled around Japan.

From bottom to top, a brief summary of each:

Handbook to Life in Medieval and Early Modern Japan by William Deal.
If you’ve ever wanted to know how the average peasant lived in 1500s Japan, this is the book for you. This covers the mundane daily life of everyone from the lowest in society to the samurai warlords fighting for power.

The Pillow Book of Sei Shonagon.
A diary written by a lady in waiting in Japan’s Imperial Court in the 10th century. A fantastic view into daily life during Japan’s golden age. And she’s quite witty and hilarious to boot.

True Path of the Ninja by Antony Cummins and Yoshie Minami.
The Book of Ninja by Antony Cummins and Yoshie Minami.
These two go together. The first is a lot of true ninja history and how they operated. The second is an English translation of the ninja scrolls handed down to the Emperor at the end of the Tokugawa Shogunate. This includes recipes for how to make smoke bombs and other pyrotechnics. I may have to start a YouTube series…

Legends of the Samurai by Hiroaki Sato.
Wonderful history of the warlords who shaped Japan from the end of the Golden Age through the start of the Tokugawa Shogunate. A lot of the historical events in the novel are covered here in the detailed section depicting the rivalry between Uesugi Kenshin and Takeda Shingen.

The Japanese Mind edited by Roger J. Davies and Osamu Ikeno.
While all people are fundamentally the same and we’re all worthy of being treated equally as humans, our culture shapes the way we think and perceive the world. This book of essays provides insight into how the Japanese view the world, and is a great read even if you’ve lived in Japan for years and think you’ve got it all figured out…

The Chrysanthemum and the Sword by Ruth Benedict.
A true classic. If you only read one book on this list, read this one. It provides an in-depth look at life and society from Japan’s Golden Age up to (more or less) modern times.

Haruko’s World by Gail Lee Bernstein.
The story of a 40-something woman farmer in rural Japan, and the daily struggles she faces as a woman in authority in the 1970s.

Silence by Shusaku Endo.
The only work of fiction on this list, but drawn from many historical events. Martin Scorsese made a movie out of it recently.

Japanese Buddhism by Yoshiro Tamura.
Buddhism in Japan is quite different from Buddhism elsewhere. It’s fused with many local belief systems to become a unique religion from its mainland Asia brethren.

A Year in the Life of a Shinto Shrine by John K. Nelson.
Ever wonder what goes on in a Shinto shrine? This will answer every question you ever had and even a lot you never thought about.

Myths and Legends of Japan by F. Hadland Davis.
The Book of Yokai by Michael Dylan Foster.
One of the best ways to understand a civilization is through their myths and legends. These two books together cover ancient Japanese mythology, as well as the things that go bump in the night. (Also Kwaidan, not pictured, is another phenomenal resource into spooky Japanese ghosts).

In Search of Japan’s Hidden Christians by John Dougill.
Many people don’t realize that a lot of Japan was Christian in the medieval period. Entire domains and warlords converted–some for righteous reasons, others for easier access to European firearms. But when the Tokugawa shogunate came to power, they banned Christianity. The Christian movement went underground and still exists to this day. Many of them are still afraid to come out, even though there’s no more danger in it. They’ve become accustomed to hiding for centuries now that it’s part of their way of life.

日本妖怪大全 by Shigeru Mizuki.
Another book of creepy ghosts and monsters, with great illustrations!

2 thoughts on “How many books does it take to write a book?”